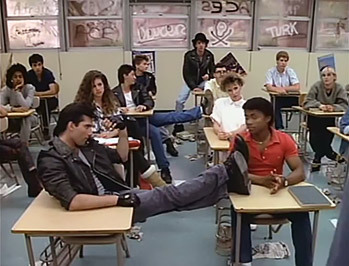 School Bully: Hey where's our regular teacher?
Hammer: He took an easier assignment.... as a janitor at Chernobyl.
— Sledge Hammer!, "To Sledge With Love"
Advertisement:

Schools based on those in Real Life, where the poorer students go, not to learn, but to cut class, steal what isn't nailed down, vandalize what is, get it on in the restrooms, and do drugs all the time. Most of the teachers have all just given up on doing any actual teaching.

And there are touches just to show how bad things are, like cages around the clocks, just to keep the students from messing with them.

This is where the Save Our Students plot usually takes place (but not always). They are often multi-ethnic enough to throw together a Five-Token Band. There is no in crowd to be in, and if circumstances force a Rich Bitch to transfer here, she will be devastated to learn there is no respect for the Alpha Bitch.

The uniform of choice involves piercings, hair spray-painted every color of the spectrum, leather jackets, and/or baggy jeans showing off students' colorful boxers.

Truth in Television to Latin American public schools which are more or less homogeneously disseminated throughout the city, either the outskirts, very near to decent residential areas, or in the heart of the city. No matter where you go, many public schools will fit this trope to a tee. Sometimes there are (often haphazardly worn) school uniforms thrown into the mix. That's why there exists somewhat affordable (for the middle class) private schools in LATAM run by religious congregations — these schools are called "parroquiales". Also true in the US, as American public schools are funded by local taxes on property and the inner city tends to be poor. Higher-income parents tend to live in the suburbia outside the city's municipal boundaries and commute daily).

Inverted in many parts of Europe, where the well-to-do tend to live in the inner cities.