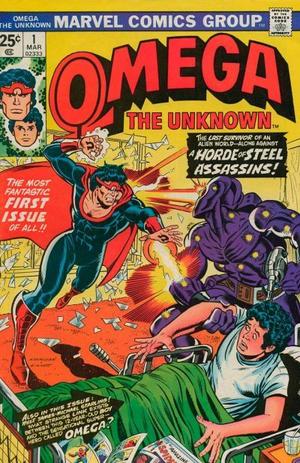 Ignore the guy with the cape and watch the kid instead.
Advertisement:

Omega the Unknown was a short-lived yet influential comic created by Steve Gerber which ran for 10 issues (March, 1976-October, 1977). Tired of annoyingly plucky boy sidekicks, Gerber pitched it as a realistic portrayal of a young boy's life, but Stan Lee insisted on more supernatural elements and crossovers with in-universe heroes. However, Gerber ably worked around these restrictions, writing a fairly down-to-earth, emotionally-driven story about a young boy's difficult life. Sure he was raised (then orphaned) by robots and had a Psychic Link with a Last of His Kind Alien superhero, but for all that, it can be surprisingly touching.

The series was canceled mid-way through when Gerber entered a struggle with the publisher over creator's rights. Omega was summarily given to another writer, who killed off most of the characters in the pages of The Defenders. Gerber was eventually let go. Despite its short run, the comic proved influential and memorable amongst comic authors, who have praised Gerber as the forerunner to revolutionary authors like Alan Moore and Neil Gaiman, who used comics to tackle serious issues, leading to the Darker and Grittier comics familiar to us today.

One author influenced by Gerber was Jonathan Lethem, a MacArthur Grant-winning novelist who rebooted the series in 2007. When Gerber heard about Lethem's reboot, he reacted with anger and disbelief that someone who called themselves a fan of his would conspire with the company that he fought with so long to take away his creation and remake it, without so much as a by-your-leave. Gerber and Lethem later spoke, and Gerber softened his critique, typifying Lethem as naive and starry-eyed.

The new series also lasted for 10 issues (December, 2007-September, 2008). Lethem spent much of his run retelling Gerber's story, and then moved on to his own variations, thick with satire and hallucinogenic reality shifts. It's questionable how pertinent Lethem could be, when Gerber was writing a decade before the graphic novel revolution, and Lethem is writing the same story thirty years after the fact.

In Darkhold: Omega #1 (January 2022), James-Michael Starling returned to life and became the new Omega the Unknown.