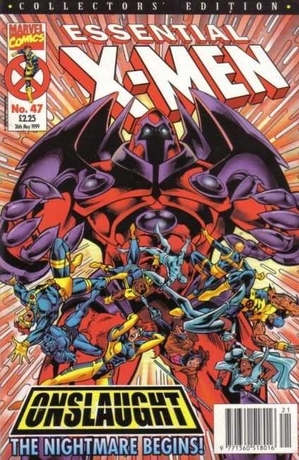 "Know my name and fear it! I am Onslaught!"
Advertisement:

Onslaught was a 1996 Marvel Comics Crisis Crossover involving nearly every superhero comic book they published at the time. The X-Men, Avengers, the Fantastic Four and other heroes fight an incredibly powerful Omnicidal Maniac which results in the "deaths" of every hero involved (except the mutants, Spider-Man and a Banner-less Hulk). Outside of comics, the series is best known for providing the Final Boss for Marvel vs. Capcom: Clash of Super Heroes.

The X-Men suffer several attacks by minions of the seemingly omnipotent entity known only as "Onslaught", who appears to know them well. He is also the one behind the recent stealing of the Sentinel fleet from a government base. When Gambit and Jean Grey go undercover to learn more about an unrelated Government Conspiracy, they are exposed but get an unexpected help from Onslaught. Later he tries to bring Jean over his side by showing her the dark long-repressed thoughts of her mentor Charles Xavier. She refuses. Juggernaut, who was attacked by Onslaught as well, comes to the X-Mansion and asks Jean to look for its true identity inside his head. She does and finds out that Onslaught is none other than Professor X.

It turns out that when Xavier brainwashed Magneto several months before (to cause him to stop being a threat after he cruelly stripped the adamantium off Wolverine's bones), a part of the latter's psyche merged with his own mind. Under the stress of constant failures and new misfortunes the Professor became more and more frustrated, until he developed a split personality, which eventually took a life of its own and was able to manifest in the corporeal world. Onslaught nearly kills the X-Men before leaving to capture Franklin Richards and X-Man in order to suck out their powers and become a living god. That brings him into conflict with both the Avengers, who were approached by X-Man, and Franklin's family, the Fantastic Four. Despite that Onslaught successfully kidnaps both of his targets, encircles Manhattan with Sentinels and prepares to Take Over the World.

The heroes (and Doctor Doom) eventually manage to defeat him but in order to do that most of them have to enter his non-corporeal form, which the X-Men then have to destroy, making it look like they killed them. Professor X is imprisoned for Onslaught's crimes and the anti-mutant sentiments become stronger than ever.

(Unknown to anyone, the heroes survived as they were recreated by Franklin's powers in another world, with no memory of their previous lives, as seen in the sequel "Heroes Reborn".)

After the events of House of M Onslaught came Back from the Dead in the aptly named Onslaught Reborn miniseries.

Thanks to the Red Skull's clone grafting Professor X's brain onto his own, and Magneto subsequently crushing his head in, he became Red Onslaught, kicking off the Autumn 2014 event AXIS.