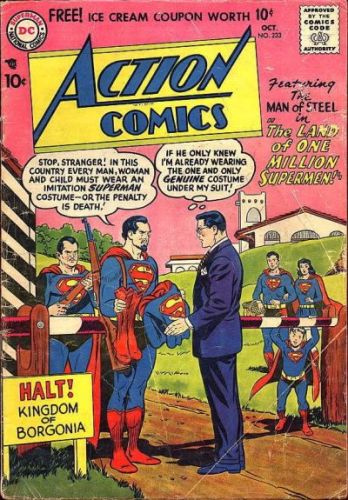 A Superhero-specific version of the Identical Stranger (often, but not always, the Criminal Doppelgänger): a not-necessarily-identical stranger wearing an identical costume.

Often an Evil Twin, trying to usurp the hero, infiltrate the Justice League, trade on the hero's reputation for personal gain, or convince people that the hero has gone bad.

Occasionally, and only in comics at the Idealistic end of the Scale, the hero will travel to some out-of-the-way spot and discover that somebody there has been inspired by tales of the hero, and has adopted an identical costume in tribute. An Emergency Impersonation plot may or may not result.

Either way, the key point is that wearing an identical costume is sufficient to turn somebody into an Identical Stranger, regardless of how different they look from the hero out of costume.

The other character's costume will be identical, or at least close enough to appear so when drawn at the comic-book level of detail. It may even be good enough to fool people who know the hero well. (The inspired-by hero's tribute costume will often have some slight difference that will let readers tell the two apart, but it's always deliberate personalisation, never an error resulting from the fact that they designed it based on rumours and have never seen the original for themselves.)

A source of much Fridge Logic involving most costumed characters as to why this doesn't happen to them more often.

Sometimes, if the hero's powers come from a magical crystal, some sort of special uniform, a suit of Powered Armor, or whatever. In that case, this trope may involve someone other than the main hero (typically one of the hero's close friends) using the equipment in their place to "pinch hit" for an otherwise unavailable protagonist.

If the copycat's costume isn't very much like the real thing, but people mistake it for the real thing anyway, it's a case of Easy Impersonation (and hopefully it's being played for laughs).

Not to be confused with Identity Impersonator, where the hero has one of his friends wear an identical outfit so that the hero can appear to be in two places at once (usually to help protect his Secret Identity). When the real character is wrongly suspected of this trope, that's Your Costume Needs Work.