Series / The Adventures of Superboy 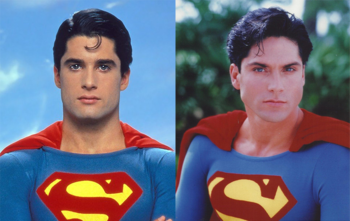 L-R: John Newton (Season 1), Gerard Christopher (Seasons 2-4) as Superboy
A television show running from 1988 to 1992, originally titled Superboy. The series revolves around a teenage Clark Kent juggling his life between his role as a student and his heroics as Superboy, the Boy of Steel.
Advertisement:

If it sounds like Smallville, well, it is, just on a much lower budget. At least in the first season. Clark and his future arch-foe Lex Luthor attend the same journalism school, and Lana Lang appears in a supporting role. The series soon underwent a major retool, owing to a recasting of Superboy; the college setting was dropped in favor of the The Bureau for Extra-Normal Matters, where Clark and Lana help investigate paranormal and alien activities.

Despite high ratings, the series was canceled in its fourth season due to Warner Bros., who filed a lien in an effort to reclaim all Superman film and TV rights (it was produced by Alexander and Ilya Salkind, who also produced the Christopher Reeve films, and though Superboy was already a property of Time Warner, its distribution was handled by Viacom). Because of the number of different companies involved in its production, the show never ran again in syndication and only in the last few years has seen limited release on DVD.