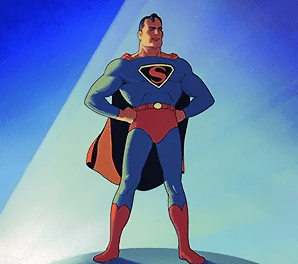 "This looks like a job for Superman!"
"Faster than a speeding bullet!
More powerful than a locomotive!
Able to leap tall buildings in a single bound!note alternately, "Able to soar higher than any plane!"
This amazing stranger from the planet Krypton!
The man of steel! (gong ring) SUPERMAN!"
— The iconic opening of the shorts
Advertisement:

From the studio that brought you such classics as Betty Boop and Popeye, Fleischer Studios played a major role in cementing the Man of Steel as a pop culture icon by means of these lavishly animated, massive budget short subjects which served to bring Superman to the big screen, from The Golden Age of Animation. These cartoons were a big deal back in the '40s — the first short, "The Mad Scientist", was nominated for the 1942 Academy Award (losing to a Disney Pluto short, Lend a Paw). These shorts were among the first cartoons that were made for genuine action and drama, rather than crude comedy, which was part of what contributed to their success. Paramount in fact had such confidence in the shorts being a hit, they even had had trailers made for them — yes, that's right, trailers for short cartoons. Try to wrap your head around that.

The Fleischer Brothers, Max and Dave, had to make similar mental gymnastics themselves at the beginning when they were approached by Paramount to make this series. Already stretched from their ill-fated feature film projects and the terrible falling out between them, they were in no mood to take on this project, which presented considerable demands for a more realistic style. So, Dave tried to scare off Paramount by saying they would need around $100,000 per short, an astronomical figure considering Disney's shorts, the most expensive shorts to produce at the time, cost on average $25,000 per short. To his shock, Paramount negotiated it down to $50,000 per short (equal to around $918,000 in 2019 dollars) and the Fleischers just could not turn down money like that, making the Superman cartoons possibly the most expensive (adjusted for inflation) animated short series in Hollywood history. And boy, does it show in the art.

On top of that, this was the series that turned Superman into a Flying Brick. To elaborate, at the time Superman's aerial abilities were limited to literally "Leaping Tall Buildings In a Single Bound," and the Fleischers intended to adhere to this, but they couldn't animate it without it looking stupid and awkwardnote The only short where they tried to do this was in "The Arctic Giant", and it's about as ridiculous looking as you'd expect. They copped out and just gave him flight, and hence an archetype was born.

On a side note, only the first nine shorts were made by Fleischer Studios, with the other eight being handled by Famous Studios, their successor. Alas, the basic American economics of the Short Film format in The Golden Age of Hollywood, where such films earned a set fee for screenings regardless of audience interest, couldn't sustain the series and it ended as simply too expensive.

On another note, in the late forties, Columbia Pictures made an unrelated live-action series of Superman serials, which featured Supes turning into an animated version of himself whenever he flew, reportedly due to budget constraints.

These cartoons were also a huge influence on the DC Animated Universe as a whole, as well as filmmakers like Hayao Miyazaki.

To date, all 17 of the cartoons have fallen into the Public Domain and are all free to view on the internet. For your convenience, links have been provided below in the filmography. Despite their public domain status, from 1969-96, these cartoons were technically the earliest-released color cartoons in the Warner Bros. library (WB and DC Comics having merged in 1969), as WB had sold the color Looney Tunes and Merrie Melodies they released prior to August 1948 to Associated Artists Productions (a.a.p., who also bought a Paramount cartoon series of their own, Popeye) in 1956 (including a 1943 Bugs Bunny cartoon that spoofed the Paramount Superman cartoons), these cartoons were owned by United Artists at the time WB and DC became co-owned, and later passed to Metro-Goldwyn-Mayer and Turner Entertainment, which merged with WB in 1996.

Paramount returned to involvement in the Superman franchise first in 1972, when it produced an episode of the animated TV series The Brady Kids (a spin-off of The Brady Bunch) that featured Superman, then again in 1995, when the acquisition of the studio by Viacom gave Paramount the US TV rights to three of the Christopher Reeve Superman films - Superman III, Supergirl (1984), and Superman IV: The Quest for Peace - along with US TV rights to the The Adventures of Superboy TV series. The former two films are now fully owned by WB, while Paramount continues to own US TV rights to The Quest for Peace as it was a co-production of The Cannon Group, whose films were distributed on US TV by Viacom and later Paramount, while CBS Media Ventures owns the US TV rights to The Adventures of Superboy.

Paramount would later co-produce with DC Comics both the film and the series of Watchmen.

A comic tie-in to Crisis on Infinite Earths (2019) established this series as a part of the Arrowverse, designation Earth-F.

Tropes Employed In This Series Include: