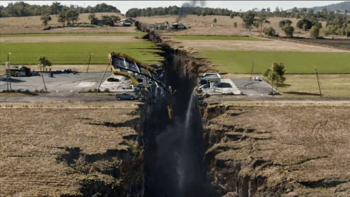 You can't fault Mother Nature for decreasing property values.
"Do you fear a shake of the earth? It would take a large crack to swallow you up."
— Uchitel, Red Holocaust
Advertisement:

When an earthquake strikes, it will create fissures into the depths of the earth in random locations, usually with a lot of people. According to fiction, anyway.

In reality, the ground often just shakes, shifts and quakes — the physical damage is usually to structures on the ground, not the ground itself. If fissures do open up, it is usually due to a landslide triggered by the quake, which means they're restricted to hillsides, mountains, and cliffs. If you see roads with cracks and fissures and dislodged pieces, it is because the wet, sandy ground underneath has liquefied, causing the road to sink unevenly and crack. And yes, that can happen to buildings too.

Fissures more directly related to earthquakes can happen. When a normal (extensional) fault slips, the soil near the surface can rip apart on a vertical rupture (the actual fault plane being at about a 45 degree slope), producing a fissure. It will, however, usually be fairly small, less than a metre wide. At most a few unlucky people might fall down and get stuck. Poorly constructed roads can also fracture like this, but never as severely as the media depicts it. In other words, you probably won't fall into a pit of lava that's apparently just 20 feet from the surface.

Sometimes, unlucky victims will fall for hours down the cracks until they reach anything.

It's yet another area in which nature fails to observe the Rule of Cool. (Probably for the best.)

When the Sharptooth is about to eat Littlefoot and Cera, Littlefoot's mom comes to their rescue.

When the Sharptooth is about to eat Littlefoot and Cera, Littlefoot's mom comes to their rescue.