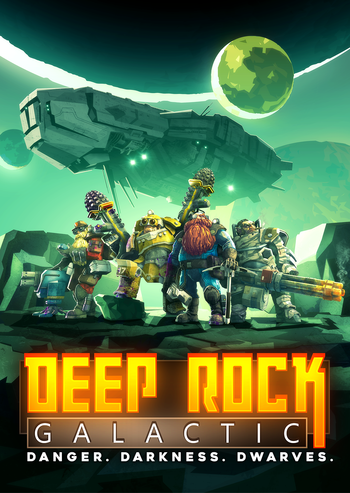 Danger. Darkness. Dwarves.
The richest mine ever discovered just happens to be on the deadliest planet in the galaxy.
It's also where you work.
Advertisement:

Located in the lawless Outer Rim, Hoxxes IV is home to the richest motherlode of valuable minerals in the galaxy. The problem? It is a Death World par excellence. Many have tried to tame this world, greedily seeking her riches; all have failed - all but one. Deep Rock Galactic, one of the biggest and most stubborn space mining conglomerates in the galaxy, has set its sights upon Hoxxes IV.

Their goal is nothing less than - in their own words - the "complete subjugation" of the planet. This will be no easy feat; the natives of Hoxxes are endless and hungry, and they have the home field advantage. In the lightless depths, intruders must contend not only with the native Glyphids, but also the many geographic hazards Hoxxes has to offer; subterranean jungle, ice caverns, even the churning tectonics of the planet's very core. Who do you call on to undertake such an insanely dangerous excavation?

Deep Rock Galactic is a cooperative First-Person Shooter and the debut game of Danish Studio Ghost Ship Games. It was released on Steam Early Access on February 28, 2018. On May 13th, 2020, it entered full release on Steam. It has also been released on Xbox One and the Windows 10 Store, and in early 2022 released on the Playstation 4 and 5. In it, you play as a team of 1 to 4 heavily-armed Space Dwarves on a mission to the most dangerous (and most lucrative) planet in the galaxy. The game consists of randomly generated and fully destructible cave systems, containing a variety of environmental obstacles and swarming with hungry bug-aliens. Players are tasked with completing a variety of objectives, such as mining as much mineral wealth as possible, escorting a Drill Tank or pumping liquid minerals into an orbitally-inserted refinement facility. Ideally, this should be accomplished without dying to the locals.

To combat the Glyphid hordes, Deep Rock Galactic fields four specialist dwarves, each with their own abilities and equipment:

open/close all folders
#-D
E-L
M-Z
Last one to the bottom of the page pays for the first round!