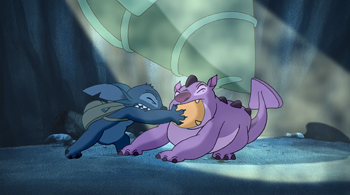 "Mine!"
"Richter" is the premiere episodenote sixth episode in production order of Lilo & Stitch: The Series. It first aired on September 20, 2003.

When Pleakley tries to get the Pelekai household prepared as earthquakes recently erupt on Kaua'i, Nani is called over to the rental hut she works at on Lahui Beach to clean up the mess caused by the quakes. Stitch accidentally breaks the hut's new shake machine during the cleanup, knocking off an orange ball on top, and he immediately takes a keen interest in the ball. After Nani sends Lilo and Stitch out to avoid causing further damage, Lilo tells him not to keep breaking things that he likes or he won't have them anymore, so Stitch decides to keep the orange ball safe. The two then notice Gantu asking a couple if they've seen any strange creatures recently, causing the two to suspect that an experiment is behind the quakes.

Our duo return home where Jumba tells them about Experiment 513, an earthquake generator who is programmed to find the nearest geological point where he can cause a massive quake that will cause the most destruction, which on Kaua'i happens to be at a fault underneath a dormant volcano on the island. The best way to stop the experiment is to fire a sticky gel substance at him. Jumba provides Lilo and Stitch capsules of said gel to use with a blaster, and Pleakley provide the two a couple of earthquake kit backpacks.

Lilo and Stitch find 513, who runs off into a cave at the base of the volcano. Gantu shows up as well, so Stitch blasts him with the sticky gel to hold him back. The duo find the experiment in the cave, but they get thrown out and the cave entrance gets completely blocked off. They head back to the household where Jumba modifies the dune buggy to be a giant drilling machine. The two return to the cave and drill their way in, and Gantu frees himself from his sticky situation and follows them.

The duo find 513 crawling around on the cave walls, and the experiment causes more rocks to fall on them. He then takes Stitch's orange ball hanging from the rear-view mirror, slaps the gel blaster out of Stitch's hand, and rolls away with the ball. Stitch chases after 513, who causes the ledge the buggy is on to collapse and fall down a ravine, with Lilo inside the vehicle. After a brief moment of hesitation, Stitch goes down the ravine and brings Lilo and the buggy back up. They then corner 513, but Gantu arrives and captures the experiment in a container. Stitch tries to take his cousin back, but Gantu gets away and fries the buggy's controls as he runs off. More rocks fall from above, but Stitch breaks them apart, preventing the buggy from getting crushed. He then fixes the controls quickly and drives the buggy back to the surface above, ending up in front of a gas station where Jumba and Pleakley happen to be shopping at for more supplies.

Lilo and Stitch tell Jumba and Pleakley about 513's capture by Gantu, with Stitch crying over his ball having been taken away. However, despite 513's capture, the quakes still keep happening. Jumba finds that 513 has caused a chain reaction of quakes that, if not stopped, will cause the Earth to be bifurcated (i.e. split into two). He says that they should evacuate the planet, but Lilo says otherwise, so Jumba then theorizes that if another crack is generated at the right angle to the first one, the quakes may stop. Lilo and Stitch then head to Gantu's ship and rescue 513 just before he gets teleported to Hämsterviel, with Stitch getting the ball back.

They bring 513 to the crack, but he wants the ball back from Stitch. Although he's reluctant at first, Stitch makes a deal with 513 to give him the ball if he fixes the crack. 513, which Lilo has now named "Richter", agrees to the deal and stops the quakes, earning himself the ball. Lilo then gives Richter his new one true place: working as a shake mixer in Nani's rental hut.