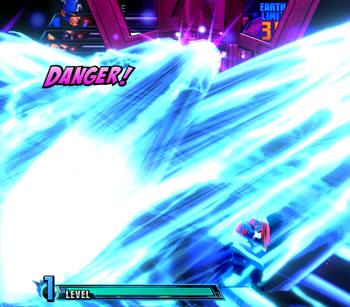 Not even your shield can protect you from Galactus' Beam Spam, Cap.

A particular attack in an enemy's arsenal which is significantly more dangerous than most of its attacks.

If you have a party, it will almost always target all party members, and it often takes off the majority of your hit points, if not worse. It's a staple for That One Boss to have one of these, possibly more. Occasionally though, even Mooks have this, making them Demonic Spiders. Instakill Mooks have these attacks practically by definition.

Skill Gate Characters may also derive their harmful-to-newbies nature from having one of these, and thus falter when the opponent learns to counter it. If these are available to players without suffering Redemption Demotion, they usually become Game Breakers.