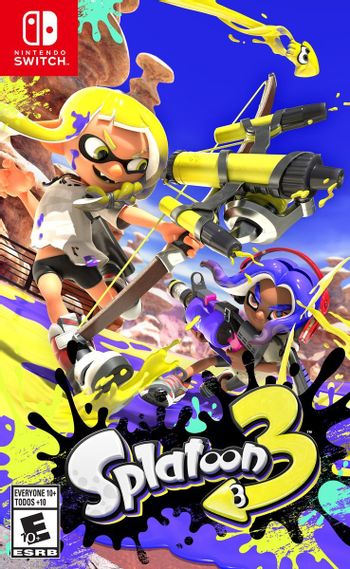 Back into the ink.
Advertisement:

Splatoon 3 is a Nintendo Switch Third-Person Shooter and the third entry in the Splatoon series. The game was announced at the end of the February 2021 Nintendo Direct presentation, and is currently scheduled for a September 9, 2022 release.

Taking place a year and a half after the events of the second game, the game takes place far outside the previous city of Inkopolis in favor of a new habitat: an arid, sun-soaked desert called the Splatlands, where Inklings and Octolings alike coexist. Following Team Chaos' victory in the previous game's Final Fest, development of the new hub city Splatsville — dubbed the "city of chaos" — accelerated to the point of becoming a new settlement for both races, transforming the city into a melting pot that advanced trends further, and even paved the way to the birth of new trends. Despite the harsh climate conditions, this has not stopped anyone from enjoying the sport they love the most: Turf Wars.

In the single-player campaign, Return of the Mammalians, the player must take the role of New Agent 3 as they help the Squidbeak Splatoon investigate the operations of the Octarian Army in the land of Alterna, as well as figure out what the deal is with this strange Fuzzy Ooze that gives everyone and anything that touches it a shaggy coat of fur.

The announcement trailer can be found here

, the story mode trailer can be found here

, the Salmon Run: Next Wave trailer can be found here

, and the release date trailer can be found here