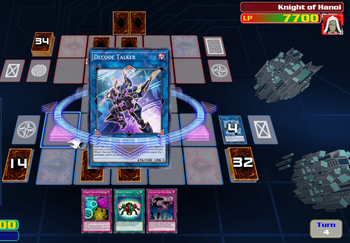 A genre of video game that is essentially an electronic Collectible Card Game. It may be an exact conversion of a real-world game, or it may be something entirely new. If it's a new game, there will probably be rules and game mechanics that wouldn't be possible in a real-world game. If the game has a plot, of course, you can expect the card game to be Serious Business, maybe even not being considered a "game" despite the obvious rules workings.
Advertisement:

To simulate real Collectible Card Games, you'll have to get cards randomly rather than choosing the ones you want (though in real life, you can usually find single cards in game stores), either by receiving them after battles or by buying booster packs at an in-game shop.

A Sister Trope to Fight Like a Card Player. Compare Deckbuilding Game, a different style of digital card games.