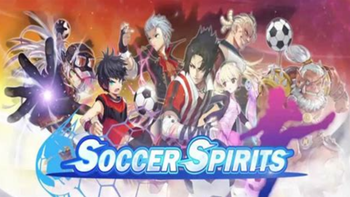 "Fantasy Soccer that's out of this world!
Build the soccer team of your dreams using players with fantastic art and unique skills.
Become the best soccer manager in the universe in this CCG that's unlike any other!"
— English Com2uS website
Advertisement:

is a free-to-play Mobile Phone Game where Fantasy characters are pitted against each other in war to be settled by playing Soccer. It was made by Korean game developers, Com2US and Bigball, in early 2014. A global release followed back in June 2014.

Long ago, many different planets fought each other in conflicts that exploded into a Great Intergalatic War. As the wars were fought, all the negative feelings like sorrow and pain were spread into the universe, and gave birth to a being of pure evil that transcends time and space called Veramod. As his power grew, the universe became barren, and the wars for resources became even more fierce, creating a vicious cycle that increased Veramod's influence and power and threatening all life. To oppose him, a Guardian made of pure light called Selena searched the galaxy for a way to turn these conflicts into something that caused no hurt, and found the answer in a underdeveloped and insignificant planet called Earth. The answer, of course, was soccer, and a tournament was created to solve all of the intergalactic disputes: The Galaxy League.

Now, in the near future, Earth is back to its old peaceful self, unaware of the happenings in the rest of the universe, but the other planets fell into unrest as rumors of Veramod's return are spreading and Selena is nowhere to be found. The remaining lesser Gatekeepers of the universe were tasked to find a hero in Earth and have him join the Galaxy League. This hero is Sam, an Ordinary High-School Student of Gale High, which is then sent to travel the galaxy in search of strong companions to fight in the next Galaxy League and stop Veramod. However, another heroine called Noa was chosen by a mysterious girl known as Eve, which seems to have her own agenda...

Each team is formed by 10 players, and the field is separated into three sections: Front, Middle, and Back. Victory is decided on who can successfully shoot the ball first into the goal, after going through all their defenses.