"Equipped with Tiger tanks and the latest weaponry, Germany’s infamous Afrika Korps have the Allies outnumbered and outgunned. Worse still, intelligence indicates the Nazis are developing a super weapon in Africa that could destroy all hopes of victory not just in Africa, but in the whole war."
It must end here. You are the turning point. Because one bullet can change history..."
—Official description on Rebellion's website
Advertisement: 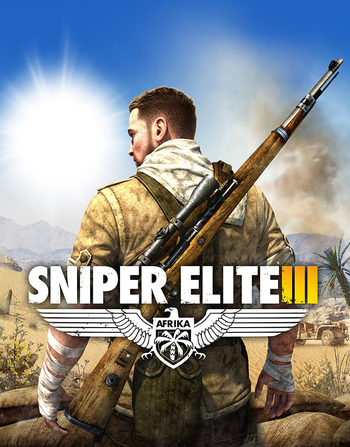 The third game in the Sniper Elite series, a prequel set during the campaigns in Africa, chronologically before the fall of the Nazis in Sniper Elite V2. You are again Karl Fairburne, an SOE officer who is sent in to deal with Nazi Wunderwaffe or Wonder Weapons. The location is various parts of Africa as Karl does his best to help turn the tide against the Nazis in favour of the Allies.

The game is aimed at being more like the original Sniper Elite, with the more open environments allowing the player to approach their targets with more flexibility as well as possibly putting them in assorted and potentially hazardous situations. The player may also find new solutions to each objective as they stalk around the enemy territory.

The core sniping mechanic is still effectively unchanged in this game but other changes were made or added to the other aspects of the game.

A more detailed kill cam incorporating a new muscle and circulatory system layers, dynamic bone fractures, and a detailed vehicle kill cam add new levels of spectacle to the game. A new variety of tricks that the player can use to distract the enemy or hide their presence are made available to the player. These tricks include starting small fires and sabotaging enemy equipment so that it produces more noise to mask the player's shots. The classic rock throwing distraction is still available.

A brand new feature added to this game is the relocation mechanic. After the player fires a shot they need to relocate or risk being found. The enemy immediately reacts to sniper fire now and heads for cover and then begin searching for the player. Repeated shots from the same location will help the enemy locate the player and they will then try to flush the player out or corner and kill them. If the player relocates successfully the enemy will eventually give up on the search allowing the player to once again more freely stalk the enemy.

Other changes to features include how the enemy infantry and vehicles react and pursue the player. The enemies now more intelligently use cover, suppressing fire, and the general environment against the player. Vehicles are no longer static and will actively hunt the player.

The vehicles have expanded weak spot mechanics but are now more difficult to take out. The player has to use a variety of tactics including mines, explosives, anti-tank weapons, or carefully placed shots at certain parts of the tank.

A new Experience Point system mechanic has been introduced that allows the player to customize their gear. The experience points can be earned in both single player and multi-player and carry over between the modes.

Received a sequel : Sniper Elite 4, set not too long after in Italia. Another sequel, Sniper Elite 5, was announced in December 2021, set for a 2022 release.