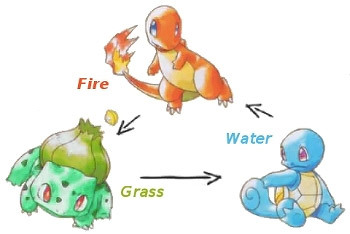 The simplest example: The starters of the Kanto region from the Pokémon series — Fire burns Grass, Grass absorbs Water, and Water quenches Fire.
"If there's one thing I know, it's water beats fire. But grass beats water, and fire beats grass. Good God, it's like a never-ending circle!"
— Daichi, Yu-Gi-Oh! GX: The Abridged Series
Advertisement:

Many works feature characters that have some elemental association, and this often includes some form of resistance or weakness to one or more elements. In some cases, these are arbitrary — even very similar characters may have wildly different resistances and weaknesses.

In the case of this trope, however, quite the opposite is true: if you know what elemental associations a character has, you know which elemental skills to use to deal the most damage. This is because, under Elemental Rock-Paper-Scissors, the elements are arranged in a pattern of fixed relationships to each other: Element A beats element B; element B beats element C; and so on.

In short, this trope is the application of Elemental Powers to Tactical Rock–Paper–Scissors.

Note that while while the trope is named for Rock–Paper–Scissors, which has a simple three-item cycle, that needn't be the case for an example to fall under this trope — Tropes Are Flexible, after all. The core idea here is that, given an element, you can reliably say which elements it "defeats" and which it's "defeated by". That said, cyclical patterns are not uncommon — likely because a cycle instates a degree of balance, with no one element being "the best". A common exception is Light/Holy vs. Darkness/Unholy. These two are typically set outside the rest of the cycle, and more often than not mutually weak to each other in favor of the attacker.

As a general rule of thumb this is an extremely popular design choice in the Gacha Games genre, since it lets developers print content and characters/weapons that fulfill similar criteria but for different elements and incentivizes players to pull more and spend more money to cover all possible type matchups.

An elemental sub-trope of Tactical Rock–Paper–Scissors. Contrast Elemental Tiers, where one element is intended to be dominant above all others. When a character sticks with a single element regardless of such a system, they become Poor, Predictable Rock. Established rules can be changed further by either side through Scissors Cuts Rock, Barrier Change Boss, and Kryptonite-Proof Suit, or bypassed with Non-Elemental, Element No. 5, and Infinity +1 Element. If an element happens to be resisted by itself, see Like Cannot Cut Like; if an element happens to be weak against itself, see Takes One to Kill One.