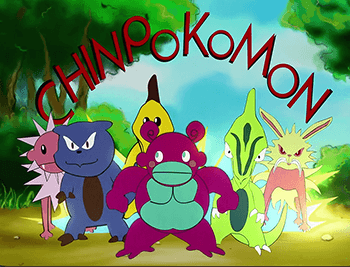 Collect them all to become the Royal Crown Chinpoko Master and destroy the evil power!
As the single most successful multimedia franchise of all time, it goes without saying that the Pokémon series has been parodied, homaged, and referenced in other works quite a bit. Most of these parodies, however, bear little actual resemblance to the franchise they are based on, and they are quite prone to Cowboy BeBop at His Computer. They tend to instead be general parodies of the concept of "Merchandise-Driven Gotta Catch Them All To Be a Master" Mons franchises from Japan that Pokémon paved the way for, such as Digimon, Tamagotchi, Yu-Gi-Oh!, Beyblade, Bakugan, and others of their nature.
Advertisement:

If a series — especially a Western series, as opposed to a Japanese one — includes a Pokémon parody, certain elements are almost guaranteed to pop up:

As the last few points should indicate, this trope has evolved (pun unintended) ever since Pokémon proved to be far more enduring than it was initially thought to be. Most parodies nowadays come from its Popularity Polynomial-inducing Periphery Demographic, and are as such far more affectionate. The classic version of this trope, which typically dismissed Pokémon and others like it as a bizarre and ultimately insipid fad, is on its way out.

Contrast All Anime Is Naughty Tentacles, which is the other way anime is usually depicted in Western media, though some overlap is possible. Compare Sailor Senshi Send-Up.

In the alternate 1999 of Hypnospace Outlaw, the equivalent to PokÃ©mon is a game about slimy, gooey animals called SquisherZ. This rap song video shows off the first 24.

In the alternate 1999 of Hypnospace Outlaw, the equivalent to PokÃ©mon is a game about slimy, gooey animals called SquisherZ. This rap song video shows off the first 24.