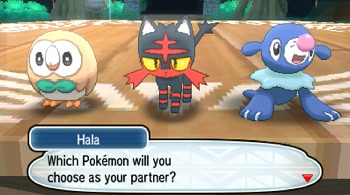 It's a simple fact in the world of Mons Series: Given the way that most problems resolve around mon-on-mon fights, you need a Mon yourself to get anywhere. But Mons themselves are often recruited through combat—either by defeating them, catching them, or appealing to them to join your cause. Since you need Mons to fight Mons, how do you even get into the world of Mon combat in the first place? Enter the Starter Mon!

The Starter Mon is exactly what its name implies: It's the first Mon the player (or main character) receives on their journey To Be a Master. Unlike regular Mons, this one is usually not caught or recruited like other Mons would be; it's typically given to them by an outside source, such as an Old Master. While in many RPGs, the Starting Equipment tends to be bottom-of-the-barrel, cheap and ordinary stuff, the Starter Mon tends to be a bit different (and a bit more valuable). They typically have three or more of the following traits:

In other words, think Starting Equipment meets The Hero.

Free-to-Play games with Mons elements tend to use a slightly different set of characteristics for their starters. Their starter mons tend to be much weaker and more common, more like Com Mons. While they can be useful later in the game, the intention is usually to keep you playing the game so you can earn better creatures—and possibly pay for better ones. On the other hand, a well-raised Starter Mon can become a character's Signature Mon.

Pokémon
Pokémon, being the Trope Codifier for the modern Mons Series, naturally features many, many examples of this trope, used in different ways:
Other Video Games
Zoids Saga has the player making the choice of their starting Humongous Mecha from Shield Ligher, Saber Tiger or Raynos.