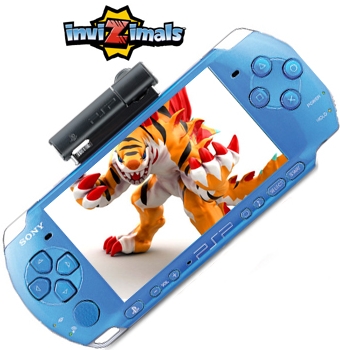 Dr. Bob Dawson: Creatures! Made out of energy! Amazing! And when hit... sparks fly off their bodies!
Advertisement:

Invizimals is a PSP-exclusive Mon-catching game developed by Spanish developer Novarama. It makes intensive use of Augmented Reality technology.

A mad scientist working with other mad scientists in the Sony PSP R&D lab discovers invisible animals that can be seen only when a person with a particularly powerful aura uses the PSP camera attachment. His sensors indicate you have a very powerful aura, so he proceeds to teach you how to capture these creatures.

The game combines live-action briefings with gameplay that takes place through the PSP's camera and microphone.

It has spawned a plethora of sequels for PlayStation Portable, Play Station Vita and PlayStation 3, as well as a Trading Card Game and other various pieces of merchandise. A 26-episode animated series entitled Invizimals: The Alliance Files was made in 2012, and the first 13 episodes were released on Netflix in 2015.note Although Netflix says it was released in 2013.