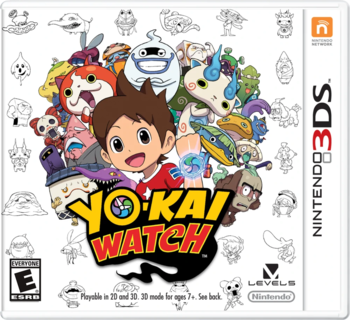 Yo-Kai Watch is the first installment of the Yo-Kai Watch franchise. It was released for the Nintendo 3DS in 2013 in Japan and 2015 intern.

While Bug Catching with their friends, the 11-year old protagonist (Nate if male and Katie if female) discovers an odd-looking gashapon vending machine near a shrine. After inserting a coin, something — or really, someone — comes out of the capsule. The ghost-looking being named Whisper claims to be a Yo-kai. He gives the protagonist a special Yo-kai Watch that can detect Yo-kai. With that, the adventure starts.

A port of the game was released on Nintendo Switch in Japan in October 2019.