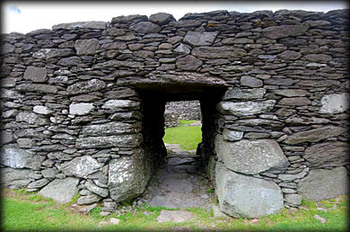 But you have to be able to get in, too.
"Don't worry, my friend! I am your shield!"
— Reinhardt, Overwatch

If the Glass Cannon believes that the best defense is a good offense, the Stone Wall goes for the reverse. The Stone Wall's offense is nothing to write home about, if it even technically exists. But he's tough. Really, really tough. And if anything can put him down, odds are he's quick enough on the recovery to get right back up for round two.

When alone, a Stone Wall's strategy is often known as "turtling": a battle of attrition to see who tires out or makes a mistake first, or a waiting game until the whistle blows. If his defense is something he physically constructs and builds, he can win a fight by slowly expanding outward until he leaves the enemy without a foot to stand on. Often has defensive buffs and minor healing magic, in which case you're dealing with a "Paladin Tank." In rare cases, he may also have access to Fixed-Damage Attacks, which by their very nature ignore stats, giving them at least a little access to actual offensive power. However, more offensively oriented characters will still always have a higher damage output with regular attacks.

Alternatively, Stone Walls can try the opposite tactic, berserking: throwing themselves at the enemy without a thought for defense. Relying on their inherent toughness to keep them alive, Stone Walls can use suicidal tactics to make up for their dismal attack power. This strategy is especially common for Stone Walls whose toughness is completely automatic, rather than something they need to work at.

In team settings, a Stone Wall often takes care of "tanking" duties, interposing himself between the enemy and an ally, typically a Glass Cannon that can take care of dealing damage while the Stone Wall takes care of defense. By keeping the enemy occupied, he allows allies with greater attack strength but poorer defense to kill the enemy without getting killed. Characters who do this are called "Meat Shields" or "Party Tanks." They often have moves designed to force attention to themselves. Sometimes called "Control Tanks". In television shows, the Stone Wall is rarely the protagonist, because viewers want a main character who can kick ass themselves.

This build has a number of flaws that can be exploited. Fixed and percent damage attacks, along with armor piercing attacks, ignore their thick defenses. Defense-reduction debuffs may be somewhat effective in exposing them to peril, but damage-over-time debuffs are invariably fatal unless cured. And if the break meter is directly tied to your defensive ability, expect anything with the ability to damage it to do so with extreme prejudice. An Instakill Mook will also be able to one-shot it as if its defenses aren't even there.

This trope partly takes its name from a real-life example: Confederate General Thomas "Stonewall" Jackson won the battle of Bull Run due to his strategy to not retreat from his line, no matter how bad things went for him. And for a while, things went pretty bad. General Jackson himself is not an example of this trope despite the nickname, as outside of that particular battle, he was most noted for his offensive campaigns.

Contrast Glass Cannon, which is the inverse with strong offense and weak defense, and Lightning Bruiser, which is tough and fast without sacrificing strength. Contrast Mighty Glacier, who is strong but lacks speed. Not an unusual trait of the Weak, but Skilled, Cowardly Lion, or Iron Butt Monkey.

Alternative Title(s): All Block No Bite, All Defense No Offense