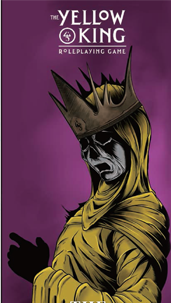 The Yellow King Roleplaying Game is a Tabletop RPG written by Robin Laws and published by Pelgrane Press in 2018, using a modified version of the GUMSHOE system. Inspired by Robert W. Chambers' short story collection The King in Yellow, it pits the characters, through multiple selves and timelines against the reality-altering horror of the eponymous play. When read, the play invites madness, and turns our world into a colony of the alien planet Carcosa. YKRPG comes included with four unique settings, and each has a slightly different version of the game:
Advertisement:

Each of these settings can be used standalone, but YKRPG is designed to be played as an overarching story across all four.

open/close all folders
In General
Paris
The Wars
Advertisement:
Aftermath
This Is Normal Now