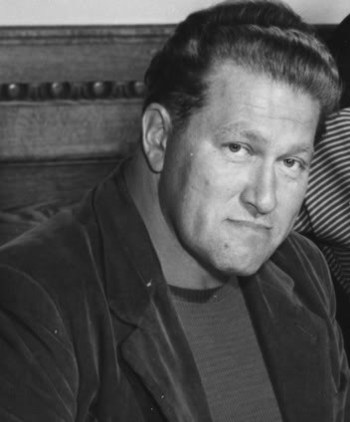 August Derleth (1909 – 1971) was an American writer of historical fiction, science fiction and detective stories, and Promoted Fanboy of both H. P. Lovecraft and Arthur Conan Doyle. Derleth is mainly credited with founding Arkham House, which published many of Lovecraft's stories in book form (something Lovecraft himself had dreamed of, but never managed to achieve in his lifetime), and popularizing the Cthulhu Mythos. At the same time, he is a very controversial figure when it comes to his handling of Lovecraft's works and literary memory. Many Lovecraft fans acknowledge that he probably saved Lovecraft's work and the Cthulhu Mythos in particular from fading into obscurity, but just as many have accused him of Running the Asylum following the years of Lovecraft's death, misunderstanding the themes of Lovecraft's stories, and even perverting them and damaging the general public's understanding of them.

Most of this conflict probably stems from the great difference in the two men's faith. Where Lovecraft was an atheist and quite The Cynic, Derleth was a devout Catholic. Where Lovecraft's universe was full of horrific forces that were at best indifferent to mankind and utterly beyond its comprehension, in Derleth's view humans were special and deeply involved in the eternal struggle between good and evil. Where Lovecraft was always nervous about his work never being good enough or worth reading, Derleth once infamously wrote of himself, "I write very swiftly, from 750,000 to a million words yearly, very little of it pulp material" - which by itself illustrates the gulf in attitudes between the men, especially following Lovecraft's passing.

Another very controversial and contested change Derleth promoted to the Cthulhu Mythos was a system where each of the Elder Gods were attached to a classical element. This led to some debate: for example, Derleth links Cthulhu with water. Arguments against point out that in Call of Cthulhu, he is dormant while his city is submerged, while arguments for the association point to the logic of linking water with an octopoid god served by aquatic minions. Also, The Dunwich Horror mentions that Cthulhu is trapped because of being sealed inside his tower, not because of water itself. More troublesome is why Azathoth, possibly the most otherworldly and cosmic of the Elder Gods, would be considered an Earth elemental.

For examples of the specific tropes used in his Lovecraftian stories, see the article for his novel The Trail of Cthulhu.

Derleth also created the Solar Pons stories based around a Captain Ersatz of Sherlock Holmes. Some of them make reference to Derleth's Lovecraftian writings. Along with these, Derleth also is known for his Sac Prairie Saga, a series of fiction, historical fiction, poetry, and non-fiction naturalist works designed to memorialize life in the Wisconsin he knew.

Works by August Derleth with their own pages include:

Other works by August Derleth contain examples of: