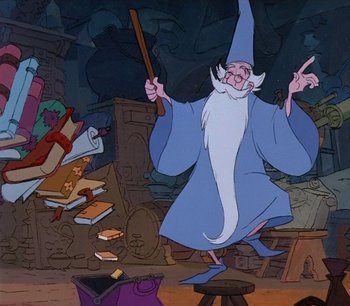 It's magnificent until it starts getting it the way.

A beard, usually white, extending a good ways down, is part of the standard appearance of a Wizard Classic. The length of a beard roughly indicates his ability as a wizard, as a really long beard can often indicate someone who is beyond a "natural" lifespan.

See also Robe and Wizard Hat. Compare and Contrast Beard of Barbarism, Beard of Evil (some evil wizards have this instead of a Wizard Beard.)