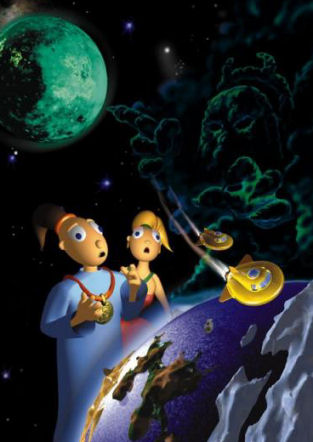 The game is set on a fantasy planet named Twinsun, populated by four intellectual races and a bunch of Intellectual Animals. The Player Character of the game is coincidentally called Twinsen; unknowingly even to himself, he is a descendant of a mysterious family, destined to save his home world. Of course, when an Evil Overlord rises, he is quickly forced to become a hero and start a long, dangerous journey to obtain enough powers to overthrow him — with a little help from other Twinsunians and a local goddess named Sendell.

The game spawned a sequel, Little Big Adventure 2, also known as Twinsen's Odyssey. It had Twinsen dealing with the arrival of aliens from planet Zeelich, who claimed to be friendly but ended up wreaking havoc on behalf of their god, the Dark Monk — who somehow looked strangely familiar...

A third game was planned, but there was hardly any word on its development outside of funding concerns until it was properly announced in September 2021

. But in January 2022, it was announced that it would actually be a reboot.

No connection to LittleBigPlanet.

Examples from the first game:

Examples from the second game: