Video Game / Lighthouse: The Dark Being 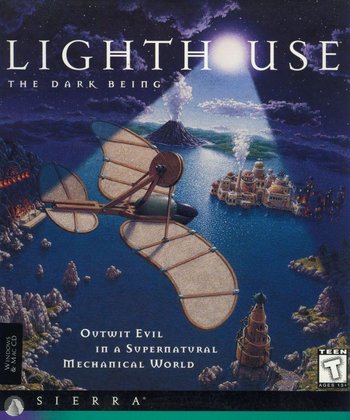 Enter the Unknown.
Sometimes simply known as Lighthouse, this pre-rendered first-person adventure game was released in 1996 hard on the heels of Myst, by none other than Sierra. It can now be purchased on GOG.com.
Advertisement:

On the coast of Oregon, you have moved to a cozy house to work on a story for the press, when it so happened that the nearby lighthouse, which was thought to be abandoned, has been purchased and refurbished by a Dr. Jeremiah Krick. Stranger still, during thunderstorms, lightning seems to strike the lamp housing and change the typical beam into a strange phenomenon reminiscent of St. Elmo's Fire, before spontaneously shutting down entirely. Then, one particularly bad night, just when your motivation to write has run out, Dr. Krick leaves a frantic voicemail on your phone asking you to babysit his infant daughter, Amanda while he's away. With strange events like that weird glow happening, Dr. Krick must be hiding a big secret.