Flower from the Mountaintop 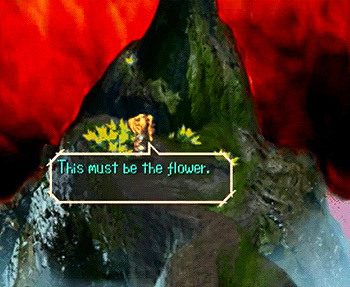 I climbed all the way up this mountain for THIS?
"There's a flower that only blooms on this mountain top. We're going to get it."
— Fuse, SaGa Frontier
Advertisement:

A character must climb to the top of the mountain to obtain a rare flower. The reason behind this varies. It may be because the flower is an ingredient in the cure to a disease, to prove his love for someone or to her father or even just to prove that he could climb to the top of Skullcrusher Mountain and come back alive.

In a series set in a "realistic" universe, the flower used is often edelweiss, which grows in the Alps. Unfortunately, many people in Real Life have fallen to their deaths trying to pick it, since it's rarer than The Theme Park Version of the Alps would have one believe, and often grows in inaccessible places.

The flower does not need to be on a literal mountaintop to fit this trope: any place which is very dangerous or difficult to access will do.