Video Game / In the 1st Degree 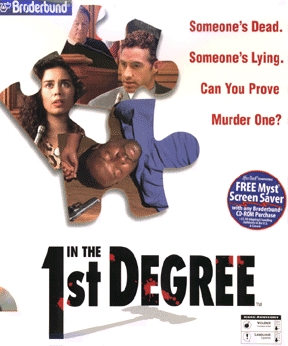 In the 1st Degree is an interactive courtroom drama adventure computer game released in 1995 by Brøderbund Software in which the player plays the role of Prosecutor Sterling Granger attempting to convict an artist for grand theft and the first-degree murder of his business partner. The player must first examine evidence, then interview witnesses, and finally go to trial to secure a conviction. The program was developed by Peter Adair and Haney Armstrong of Adair and Armstrong.

James Tobin is a struggling artist in San Francisco who owns an art gallery with his business partner, Zachary Barnes. For some time, the gallery is a lucrative business. However, after a new series of Tobin's paintings fail to sell, the gallery struggles financially. Tensions rise further when a burglary occurs at the gallery and Tobin's new series of paintings are stolen. During this time, unrelatedly, Barnes and Tobin's girlfriend, Ruby Garcia, have a one-night stand. One morning a few weeks later, an incident occurs between Tobin and Barnes at the gallery and Tobin shoots Barnes dead.

Tobin claims that he killed Barnes in self-defense following an argument and a struggle. The police do not accept this claim and believe the killing to be an act of premeditation. They believe that the burglary several weeks before Barnes' death was carried out by Tobin himself, that he stole his own paintings to gain the insurance money to save the struggling gallery. Saying that Tobin killed Barnes not only to cover up his crime but also as an act of revenge for Barnes' affair with his girlfriend, the police arrest Tobin and charge him with grand theft and murder in the first degree.