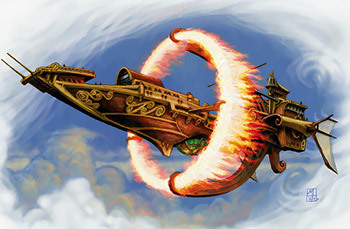 Like an airliner, but with fire elementals instead of engines.
"Your ancestors called it magic... and you call it science. Well, I come from a place where they're one and the same thing."
— Thor Odinson, Thor
Advertisement:

Advanced, ubiquitous magic always seems to end up working just like technology. The car engine might be powered by a fire elemental, and the telephone may work through the principle of contagion, but this doesn't affect the man on the street. They just get in the car and drive away, or pick up the phone and talk — no special talent required, just as if the devices were technological.

Magitek (or "magitech") often appears to combine magic with modern technology or at least something distinctively mechanical: traditional heat engine or an electrical generator powered by or powering a magic spell, or a giant mecha that can inexplicably shoot ice from an empty hand. Sufficiently Analyzed Magic frequently causes this, but isn't necessary, since a Black Box is almost as good if it's reliable and cheap enough.

When Magitek is combined with gritty realism, we get Dungeon Punk, but magitek is also common in comedic fantasy. In some works, technology is based on sufficiently advanced magic, which is itself disguised sufficiently advanced technology. Fantastic Science leads to this because it treats magic as science; something to be studied and learned and experimented with.

There is "technomancy", the school of magic that specializes in controlling or improving existing technology with magic. In these circumstances the machine would work without the magic, but magic improves it. That, or it possesses it...

With all that said, a sci-fi setting with no supernatural/fantasy elements could readily substitute actual magic with alien phlebotinum in the equation.

The Ur-Example is Robert A. Heinlein's 1940 novella "Magic, Inc.". It takes place in a (then) present-day in which, for example, your taxi is a flying carpet, but otherwise the same (cabbie, meter, and so on). The Trope Namer is Final Fantasy VI, where the Gestahlian Empire had suits of Power Armor, dozens of Humongous Mecha, and fleets of flying Mini Mecha, armed with various lasers and missiles powered by the life essence of enslaved magical creatures. Courtesy of Ted Woolsey's translations, this fantastic science and the inventions using it became known under the blanket term "Magitek."

Often involves the Science Wizard (not to be confused with the purely technical Techno Wizard). Magitek is one of the hallmarks of Science Fantasy works. May result from Sufficiently Analyzed Magic. Also, Utility Magic, which can sometimes manifest as this. Contrast with Clarke's Third Law, Magic from Technology, and Post-Modern Magik. See also Harmony Versus Discipline, Ritual Magic, and Alchemy Is Magic.

Lady WiFi's cell-phone can affect the world around her.

Lady WiFi's cell-phone can affect the world around her.