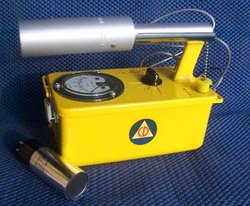 The Geiger counter clicks as it detects radiation, so beware if it gets too loud.
"Tracked you down with this. This is my timey-wimey detector. It goes 'ding' when there's stuff."
— The Doctor, Doctor Who, "Blink"
Advertisement:

It's a wonderful device — a detector that detects the things you need! There is a detector for everything — Applied Phlebotinum, Green Rocks, guns, bombs, spaceships, ghosts, mice, cheese, socks... If you live in a high-tech setting and need to find something, there is a type of The Little Detecto that will detect it!

The physics behind the Little Detecto is never explained. It just detects the thing that is the local Serious Business.

The Trope Namer is a gadget from one Tom and Jerry cartoon that was used to detect mice.

Compare Thing-O-Meter, a comedy trope. Contrast with Everything Sensor; The Little Detecto only detects the one thing that is Serious Business.