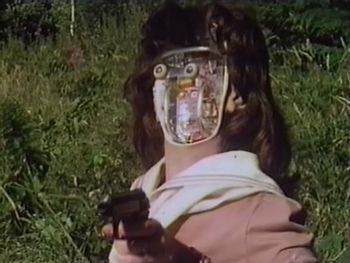 Huh, Sarah did something with her hair...
"Is that finger loaded?"
— The Doctor sizes up the threat.
Advertisement:

Written by Terry Nation. This four-episode serial first aired from November 22 to December 13, 1975.

The TARDIS lands in a typical English village that Sarah recognises as Devesham, home of the British Space Defence Station. However, it soon becomes obvious that things are not all as they should be, and the Doctor and Sarah realise that the village is a replica populated with androids.

An alien race — the Kraals — are aided by a brainwashed human astronaut, Guy Crayford, and have built the replica to rehearse for an invasion of the Earth. Styggron, a Kraal scientist, has perfected a lethal virus and plans to use his androids to disseminate it around the world, paving the way for the Kraal fleet.

Crayford, whose rocket had been damaged and who was rescued by the Kraals, returns to a hero's welcome. Despite the Brigadier being off in Geneva, the Doctor is able to warn UNIT about the android replicas — which now include himself, Harry and RSM Benton. The Doctor manages to use the radio equipment at the base to jam the android control signal and stop Styggron releasing the virus. He then uses his own android replica to fight Styggron, who infects himself with the virus in the process and is killed.

One of only two non-Dalek scripts written by Terry Nation, though a significant amount was re-written by script editor Robert Holmes, and Tom Baker and Elisabeth Sladen apparently changed much of their dialogue.