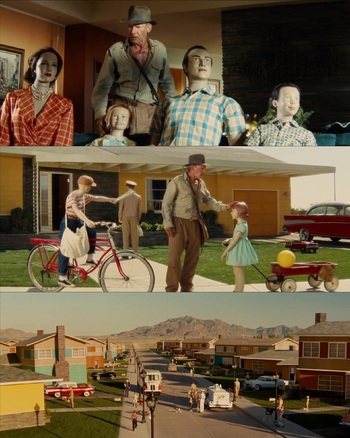 *Nuclear warning siren in the distance*
"...oh that can't be good..."
Advertisement:

The solution? If there's no need to spend too much on it, slap up some plywood billboards made to look like the fronts of buildings. As long as no one looks behind it, the illusion should be effective. For a version not as dependent on viewing angle, you could also slap up empty shell buildings made from cardboard or other cheap materials. It doesn't need to be structurally sound; it just needs to hold up long enough to fool whoever it needs to fool. Or, should the fake town really need to look realistic, build actual houses and roads, perhaps install a power grid and water network; make it look like a thriving and inhabited place, except for the fact no one is supposed to actually live there.

That's Exactly What It Says on the Tin: fake towns may be built for the most disparate reasons.

Frequently, they are erected for deceiving purposes: in a Crapsaccharine World, they're helpful for creating a falsely peaceful and idyllic atmosphere, hiding away unpleasant realities. They can be used as a trap to lure enemies or, conversely, as a tactical decoy, to distract them from a crucial target; in times of war, this often turns out to be a useful military tactic. This specific application is referred to as a "Potemkin village

When they lack a deceptive purpose, they may be set up as a staging ground for simulations, training, or experiments, with the occupants aware of the fictitious condition of the place. This makes them an excellent Simulated Urban Combat Area or Deadly Training Area, if something has to be tested in an environment that resembles an actual inhabited place but is too dangerous (intentionally or otherwise) to use in a populated area.

A similar concept is Artificial Outdoors Display, although that tends to be used mostly for esthetic purposes with no deceptive intention. Do not confuse with Ghost Town or Ghost City, as they used to be actual functional living areas at some point, unlike fake towns built specifically for non-residential purposes.

The entirety of Bright Falls was recreated in the Dark Place, Alan reliving events in what can only be described as a warped dream-like version of the game's plot and setting.

The entirety of Bright Falls was recreated in the Dark Place, Alan reliving events in what can only be described as a warped dream-like version of the game's plot and setting.