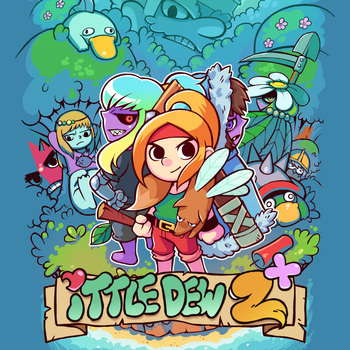 Ittle Dew 2 is an Action-Adventure game developed by Swedish developer Ludosity, and the sequel to Ittle Dew. After the first game's adventure, Ittle and Tippsie are on a raft in the middle of the ocean... and somehow crash on shore in a pond on a new island. After meeting Passel, who tells them there is no adventuring to be had here and that they should both just swim off the island, Ittle and Tippsie find out there is an adventure here, and the prize just so happens to be the pieces for a brand new raft.

Ittle Dew 2 is heavily influenced by older The Legend of Zelda titles, just like the first game, with weapons being used to solve various tile-based puzzles like before. The game has a stronger emphasis on combat, with tougher enemies, a new dodge roll, and a slightly more harsh punishment for dying. The games structure has gotten an overhaul as well, featuring eight dungeons with the first seven being playable in any order, a large amount of hidden secrets hidden across an expansive overworld, and a jump to 3D graphics that emulate its predecessor's art style, down to the Line Boil.