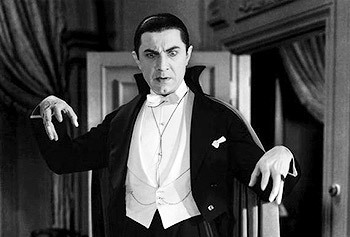 The stock portrayal of vampires for years, but no older than cinema, the Classical Movie Vampire was first developed from Bela Lugosi's stage portrayal of Dracula before being codified by his performance in the 1931 film version made by Universal Pictures. Several aspects of Lugosi's Dracula became iconic enough that practically every male vampire in popular culture from then until the 1970s was like this, although nowadays it's pretty much a Dead Horse Trope aside from deliberate parodies or homages.

This type of vampire will be easily recognized by his slicked-back hairstyle (which usually features a widow's peak), his sinister yet gentlemanly personality, his suavely outdated wardrobe (consisting of white tie and tails with a black Ominous Opera Cape and High Collar of Doom), his calmly menacing demeanor (albeit with the occasional dramatic flourish), and of course his heavy Eastern European accent (liberally peppered with Vampire Vords). Often his eyes will be framed in a beam of light. Note that, while in Bram Stoker's original novel Dracula is described as having a long mustache (and, later, a pointed beard), the Classical Movie Vampire tends to be clean-shaven.

Occasionally, elements of the Classical Movie Vampire are also taken from Christopher Lee's more monstrous portrayal of the Count in Hammer Horror pictures. In such cases, the vampire is over six feet tall and has both red eyes and more pronounced fangs. Lee's version (especially initially) hardly spoke at all, emphasizing his towering physicality.

In a Monster Mash, this is the type of vampire you should generally expect to see (although other kinds of vampires may also show up). Sometimes referred to as "The Full Lugosi" or as "draculas."

A Sub-Trope of Our Vampires Are Different. A Super-Trope to Vampire Vords (about the way this character type usually speaks, an exaggeration of the way Lugosi really spoke English). A Sister Trope to Looks Like Orlok. Contrast Feral Vampires.

A squirrel vampire and an ancestor of Conker. He reveals that Conker is a direct descendant of the usurped squirrel monarchy.

A squirrel vampire and an ancestor of Conker. He reveals that Conker is a direct descendant of the usurped squirrel monarchy.