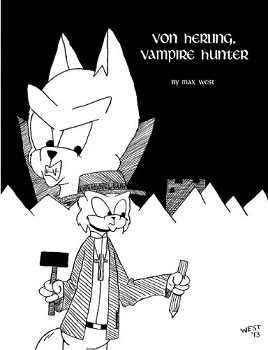 Von Herling, Vampire Hunter is a 2014 graphic novel of Gothic horror by Max West.Set in the fictitous town of Richten in Eastern Tennessee and starring an all anthropomorphic animal cast, August Von Herling arrives in town on business. He is in search of a vampire that he's tracked all the way from Romania. Von Herling though quickly sticks out as a new arrival due to his formal dress and vocabulary.

Von Herling meets two young ladies at a dinner party soon after - Brittany Parsons and her shy friend, Peggy Jo Warner. He also meets Vlad Magnus, another newcomer...who happens to be the vampire Von Herling has been tracking. When people start disappearing and Brittany becomes ill from a sudden blood loss, it's up to Von Herling to stop Vlad Magnus before it's too late.