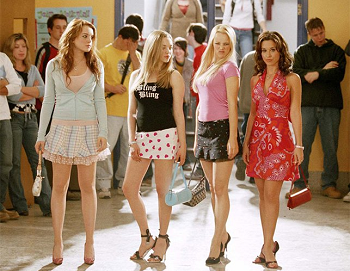 "Out of the way, bitches! We're hot and popular - you're not." note From left to right: The Naïve Newcomer, the Brainless Beauty, the Alpha Bitch, and the Beta Bitch.
"They ruled the high school. Decided what was in, who was popular... it was kind of like the Soviet Secret Police if they cared a lot about shoes."
— Angel, "Rm w/a Vu"
Advertisement:

In a High School series, there's pretty much always a jerkass, if not evil, popular girl. We'll call her the Alpha Bitch and give her an entry of her own, otherwise she might tell all the cute boys that we have smelly man feet.

She always has a posse of well-dressed, mean girls with her (two to four girls at the minimum), who don't really say anything except to parrot her opinions and attitudes—sort of the high school version of Evil Minions meets Satellite Character. If the posse members are slightly more developed, expect at least a devoted second-in-command (who may or may not be an insecure mess), a pretty but dimwitted follower (who occasionally overlaps with the second-in-command), and possibly a new girl, who will be briefly suckered in by the Alpha Bitch.

The posse members might be just as nasty as the leader (if not secretly more so), because Popular Is Evil. Or they could be a Peer-Pressured Bully who joins in on the harassment of less popular students to stay on the queen bee’s good side, and thus keep her school status.

They are often Gossipy Hens as well. They are very unlikely to be A Friend in Need, even to each other. May also overlap with Terrible Trio,note which has the Alpha Bitch, the Beta Bitch, and the Brainless Beauty and always a Freudian Trio.

It's also possible for a Girl Posse led by a Lovable Alpha Bitch to be portrayed positively, or at least neutrally, although this is pretty rare.

Chanel Oberlin is the queen bee of her sorority, to the point of renaming her minions Chanel.

Chanel Oberlin is the queen bee of her sorority, to the point of renaming her minions Chanel.