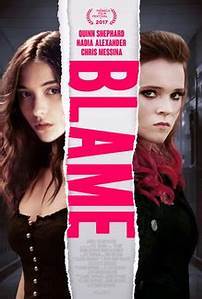 Abigail (left) and Melissa (right).
Abigail Grey (Quinn Shephard), a troubled teenage girl, returns to school after she's received treatment for an unspecified mental health problem. She is mocked cruelly over it by other students, with Melissa Bowman (Nadia Alexander) leading them in the bullying. However, in drama class the new substitute teacher Jeremy Woods (Chris Messina) leads them studying The Crucible and he chooses Abigail to play her same-name role given her talent. Abigail begins to shine again with his tutelage, and begins developing feelings for Mr. Woods. Melissa also finds him attractive, and grows increasingly jealous, as the film's events begin to echo The Crucible's.