Film / Blame It on Rio 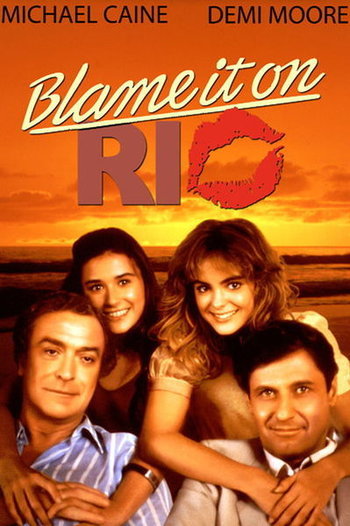 Matthew (Caine) and Victor (Bologna) are good friends and business partners who live and work in São Paulo, Brazil. Victor is going through a nasty divorce from his wife, and Matthew's relationship with his wife Karen (Harper) has turned frosty. The two men and their families are headed off to a vacation in Rio de Janerio, but at the last second, Karen says she isn't going with them, but prefers to go off on a vacation by herself.

That leaves Matthew, Victor, Victor's 17-year-old daughter Jennifer (Johnson), and Matthew's daughter Nikki (Moore). The foursome heads off to Rio together. Soon Victor discovers that Jennifer, who is underage, slept with an older man. Furious, he asks Matthew for his help in catching the older man. There's just one problem: That "older man" is Matthew.