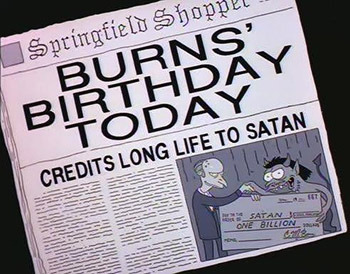 So is Satan just generous when people don't have a soul to sell? Maybe if you do enough deeds in his name...
"It's hard to be religious when certain people are never incinerated by bolts of lightning."
— Calvin, about Moe, Calvin and Hobbes
Advertisement:

The character has done a number of things that deserve a karmic comeuppance, most importantly things that caused harm to the innocent. But when the time comes for the hammer to fall, that's not what happens. At least, not on them. They don’t get what they deserve. Instead, they get away scot-free. They are Easily Forgiven, maybe even praised, and even elected president. And they might even have reversed the Humiliation Conga that was being planned for them. Worst comes to worst, The Bad Guy Wins and a stolen happy ending takes place at the expense of the hapless victim who may be punished in the guilty character's place.

This is it. This is all there is to the story. The show is over. The book is finished. The author isn't going to write any more. The Word of God has been spoken. Karma is out to lunch. The villain has become a Karma Houdini.

Predictably, it is often shocking or downright upsetting to see such scoundrels dodge instant karmic punishment and come out triumphant in the end. As such, expect fans to clamor for a sequel where the villain gets their comeuppance — or try to satisfy that frustratingly unfulfilled desire for retribution by writing their own.

There can be a number of reasons for this trope. Sometimes, the story is going for a Downer Ending in which the villains escape justice for their crimes. Other times, the creators overlook relatively minor offenders, whether due to not considering their actions worthy of punishment or not having the time to see them get their comeuppance within the story. Still other times, it may not be possible to exact retribution on the characters who ends up becoming Karma Houdinis, whether because they're too powerful to be subject to retribution, there's no way to legally judge them or some other reason.

Compare Butt-Monkey, for which a character ends up having many disproportionately bad things happen to them throughout the story (and may also technically qualify for this trope, as hard as that sounds). The extreme counterpart of the former trope, Cosmic Plaything, can be considered this trope's polar opposite. Also compare with No Good Deed Goes Unpunished, where the good guy suffers as a result of doing the right thing.

Contrast the aforementioned Laser-Guided Karma (when the villain's comeuppance is swift and immediate), Karma Houdini Warranty (when it takes much longer) and Karmic Death (when it leads to the villain's death). Also see Idiot Houdini, when a person is forever protected from the results of their stupidity.

Note that a character doesn't necessarily need to be a full-time villain to qualify for this trope. They may simply end up doing unnecessarily hurtful things, yet not suffer the repercussions. (In contrast, when someone is too evil to kill off, but may suffer other consequences, see Joker Immunity.)

Note also: The work usually must be completed for a character to qualify as this trope. Only if there are no more opportunities for Laser-Guided Karma to strike can a character be said to have successfully avoided any consequences for their actions. Exceptions may be made in cases where Status Quo Is God, or when a character can be said to have permanently escaped, e.g. they died peacefully in their sleep at an old age. And sometimes even that’s not enough. (Unless they somehow managed to get into Heaven and are gleefully rubbing their current state in your face). Otherwise, resist the urge to put it on an ongoing work's page.

Don't mistake a lack of direct karma for this trope. If a character, for example, murders someone and never gets caught, but a freak lightning strike kills them, they've still gotten their comeuppance even though the lightning had no connection to their crime. Think of the writer as God, with the power to punish or not punish a character who does evil.

Not to be confused with a literal Houdini-style escape by the villain to avoid justice, that's Villain: Exit, Stage Left, although the two certainly can (and often do) overlap.

This is a spoileriffic trope; spoilers shall be unmarked. You have been warned.

Even when Ham and Judy exposes Momma and Poppa's disgusting food practice in the local newspaper, their restaurant remains open and people are still eating there.

Even when Ham and Judy exposes Momma and Poppa's disgusting food practice in the local newspaper, their restaurant remains open and people are still eating there.