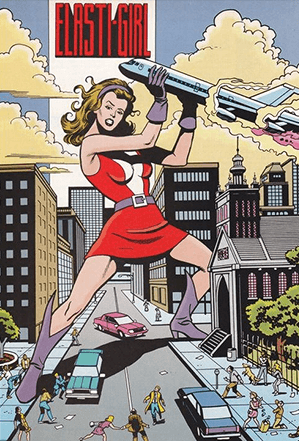 She's big, she's beautiful and can literally catch a plane!
"But if it were me,
I'd really wanna be
A giant woman,
A giant woman!
All I wanna do
Is see you turn into
A giant woman.
— Steven, Steven Universe, "Giant Woman"
Advertisement:

So you want to have a monster in your movie? Great! But what kind of monster? A giant bug? Too gross. A huge lizard? It's been done, a lot. You could go with the tried and true human giant, but how can you make it different? I know, make it a woman!

One variant of Attack of the 50-Foot Whatever and Our Giants Are Bigger is to take a human female and make her giant. This tends to throw twists into the usual trope by having the giant woman as a Ms. Fanservice, Cute Giant or Cute Monster Girl. Because of her attractive qualities, it's not uncommon to find some people more thrilled than terrified of her presence, which usually ends very badly for said onlookers. If the giant female goes on a rampage, it is usually Played for Laughs or Fanservice more often than other examples of giant rampaging behemoths. It can also be used as an inversion for the classic Damsel in Distress trope, as instead of a rampaging monster kidnapping a beautiful woman, the beautiful woman is the rampaging monster, potentially kidnapping a man or, as a Shout-Out to King Kong, a regular-sized ape or monkey. One can also often expect a Shout-Out to the iconic "highway-straddling" Attack of the 50-Foot Woman poster to pop up in some fashion.

Another thing that sets the giant woman apart from other titanic beings is how her rampages typically end. While most giants and giant monsters are defeated and/or destroyed at the end of their stories, the giant woman usually survives to complete her havoc. She will stomp around causing destruction, torment, crush or eat her (typically male) victims, then strut away satisfied, receiving no comeuppance for her actions.

When this becomes a sexual fetish, it's called macrophilia.

Compare Statuesque Stunner, for sexy women who are taller than average, but not tall enough to be giantesses; Incredible Shrinking Man, which can have the same result of a woman looming over people, but with the size roles played in the other direction; and Tiny Guy, Huge Girl, which can overlap with this trope if the size differences between the two are more pronounced. Not to be confused with Big Beautiful Woman, which is about overweight but realistic-sized attractive women.

Scene from My Hero Academia, Ep 01. In the opening of the series, we see Midoriya watching a superhero fight along with a crowd. Just when one of the heroes, Kamui Wood, is about to do his finishing move. In comes Mt. Lady, a recent newcomer to heroics with the power to grow giant, to steal his thunder.

Scene from My Hero Academia, Ep 01. In the opening of the series, we see Midoriya watching a superhero fight along with a crowd. Just when one of the heroes, Kamui Wood, is about to do his finishing move. In comes Mt. Lady, a recent newcomer to heroics with the power to grow giant, to steal his thunder.