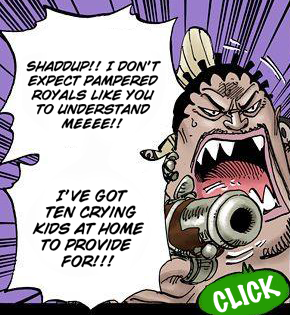 "You don't understand! I have a daughter and she's sick! That makes it okay for me to break the law! ...I'm not a bad person..."
— Flint Marko, How It Should Have Ended for Spider-Man 3
Advertisement:

This is a trope for when a person becomes a criminal because of socio-economic reasons, or just plain horrible circumstances, and is portrayed sympathetically because of this. Basically a person or a group of people are in dire straits and need money immediately and become bank robbers and drug dealers out of necessity. This trope usually occurs in crime dramas (specifically urban dramas). Also may be considered Truth in Television. And more often than not it's usually overlapped with Plethora of Mistakes. Also can be a case where a hero has to choose to do what's right despite being illegal. Or something morally dubious for a greater good. This trope almost always falls on the Gray-and-Grey Morality side.

Some social analysts have also have been known to refer to this as "Survival Crimes".

This trope is to be expected in a Crapsack World. See also Karmic Thief, Caper Rationalization, and Just Like Robin Hood. Compare to: I Did What I Had to Do. See also Single Mom Stripper, in which necessity leads to degrading (but not necessarily criminal) work, Healthcare Motivation, in which the criminal wants money to pay a treatment or operation for a friend or sibling, Trapped by Gambling Debts for when the criminal is attempting to pay off debts, and The Commies Made Me Do It for people Forced into Evil by those holding their loved ones hostage.

May involve an Asshole Victim on the receiving end, particularly if the Justified Criminal is presented as sympathetic for committing assault or even murder in the defense of someone else. The most justified examples also steal for survival and non-violently.

See also Jaywalking Will Ruin Your Life, for when the crime that started it all was pathetic, but still more than enough to cast one out of civilized society.

Some might justify being evil or criminals as being a Necessarily Evil, a Lesser of Two Evils, or a case of Better the Devil You Know.

Play straight first and then subverted. Cousin Danica reveals she was a bank robber because she got fired from her job and her home was about to be foreclosed on. The second time she did it was because she was bored, and the third time was because she "caught the bug".

Alternative Title(s): Money Is The Rool Of Evil, Sympathetic Criminal

Play straight first and then subverted. Cousin Danica reveals she was a bank robber because she got fired from her job and her home was about to be foreclosed on. The second time she did it was because she was bored, and the third time was because she "caught the bug".