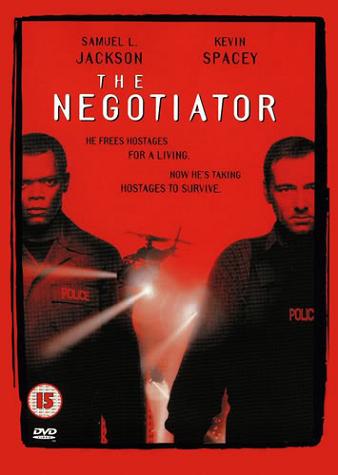 He frees hostages for a living. Now he's taking hostages to survive.
"When your friends betray you, sometimes the only people you can trust are strangers."
— Lt. Danny Roman
Advertisement:

The Negotiator is a 1998 film starring Samuel L. Jackson as Danny Roman, a Chicago Police Department hostage negotiator framed for the murder of his partner, Nate Roenick (Paul Guilfoyle). Nate was murdered when he uncovered serious corruption within their unit. Not knowing who he can trust, Danny turns to taking hostages to find the truth about Nate's murder. Unable to trust his friends, he calls upon a stranger, and fellow negotiator, Chris Sabian (Kevin Spacey), to prove his innocence.

The film was directed by F. Gary Gray, previously known for Friday (1995) and Set It Off (1996). It was not a box office hit, earning about $44,547,681 in the United States market. It was only the 47th most successful film of its year. However, it gained mostly positive reviews and earned both Gray and Jackson a number of awards.

Tropes list contains unmarked spoilers. Please repair if you have a moment.