Is That a Threat? 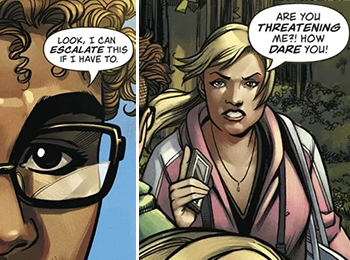 When threatened, a character responds with, "Is that a threat?" or "Are you threatening me?" regardless of how poorly veiled the actual threat was. Stock answers include, "No, it's a fact", "No, it's a promise", and "Yes". A common variation is having the character asking "is that a threat or a promise?", and it's usually used as a form of Threat Backfire, when the threatened thing wouldn't inconvenience them, or even would benefit them.

If the threatened punishment is perceived as an Unishment or the threatened character is Too Kinky to Torture, the recipient of the ultimatum may reply, "Why must you tempt me so?"

Compare "Blackmail" Is Such an Ugly Word and Implied Death Threat.