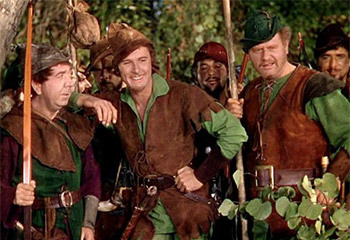 Meet the (Green Shirt!) Trope Namers.note Includes those in the back.
Advertisement:

This is the competent converse of the Red Shirt Army.

They are not the protagonists, but just their support (or cavalry). We probably won't get to know many of them well, though those we do meet we'll probably know better than a Mauve Shirt. As far as Character Focus goes, they could be Cannon Fodder...

...but they are not. Most of them still have no names given and will dress alike, but whereas the Red Shirt Army is not guaranteed to, these guys will live. Furthermore, they are competent at fighting their enemies, especially those who can kill just by one looking at them funny; they are truly helpful in a tactical situation (or "hot zone"). Whether this help is acknowledged depends on the writer.

They can hit their opponent most of the time, unlike their opponents who graduated at the Imperial Stormtrooper Marksmanship Academy. Regardless of how many hits they take, they can go head-to-head with the enemy without being wiped out in seconds, and often without losing any men at all.

The key difference between these guys and a Badass Army is that they are not technically an army. Usually they'll be a relatively small and elite fighting force, and they're more likely to answer to a single individual or be devoted to a specific cause. Contrast with Badass Crew, which will also encompass a small team, but is made up of distinct characters and more likely to be the focus of any given story.

Named for Robin Hood's army of outlaws in the classic film The Adventures of Robin Hood (known as the "Merry Men" in folklore). Not to be confused with Brad Sherwood or Sherwood.