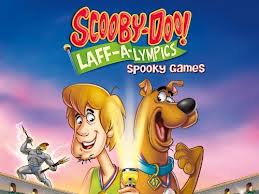 Scooby-Doo! Spooky Games is a 30-minute Scooby-Doo special released in 2012.

A woman named Diane is picking the final American track and field champion, when Shaggy and Scooby run by, trying to escape a monster attack. Once Fred catches the monster, Diane approaches Shaggy, telling him that he unofficially broke a world record. She brings him and the gang along to the 2012 London Olympics, with Scooby-Doo as his trainer. When they arrive, they meet Steve Looker, the American pole vaulting champion, for whom Daphne immediately falls. This causes Fred to get jealous, and lie about being a pole vaulter himself, which is overheard and earns him a spot in the games.

Unfortunately, with the gang comes a monster mystery, as a statue of Fortius, one of the first Olympic champions, comes to life and begins terrorizing the games. Diane reveals that another reason she invited the gang is that she was afraid this would happen, as the statue is cursed, or something.