Your Size May Vary 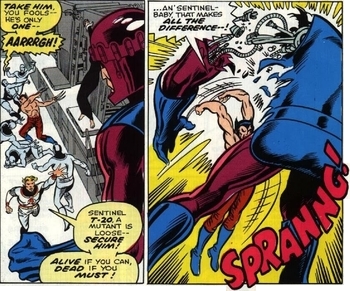 Oh, fifteen feet tall? I thought you said fifty feet tall.
"Scale in Transformers is, not to put too fine a point on it, screwed."
— TFWiki.net, on Scale

Giants are pretty cool guys. They punch harder, take more hits, and aren't afraid of breaking certain laws of physics. There's a problem with having giants as part of the main cast, though: they don't fit in small places. If The Hero has to lead his True Companions through the Elaborate Underground Base or the Evil Tower of Ominousness, the Gentle Giant can't really follow along if his hand can completely block off the entrance. It also becomes much more difficult to keep everyone on panel or camera if there are huge height discrepancies.

Fortunately, animators have found the solution to this problem: completely disregard any sense of consistent scale! Sure, the giant is half the size of the building... on the outside! On the inside, he's got a good 10 or so feet (3 m) of space between his head and the ceiling. This effect is particularly noticeable when size is compared to other characters; a regularly-sized human might stand about as tall as the giant's hip in a regular scenario, but the giant will easily catch that same character in the palm of one hand in a later action sequence.

The same lack of consistency holds true for tiny characters as well. Unless size is specified, characters who are simply stated to be "small" tend to bounce between the size of a housecat and a rat, or for even smaller characters, a rat and a roach. Don't be surprised if a fairy who fits in a character's shirt pocket later turns out to be as big as a baseball in a later fight.

Note that this trope mostly applies to animation and special effects. It is rather... difficult to modify the size of an actor in a live-action series. Though in some cases there might be a size discrepancy due to the visual requirements of keeping two actors of wildly different heights in the same frame. See Scully Box for that. Perspective can also be a tricky thing, and some angles might unintentionally give an odd size comparison even if the math is right. This trope does not cover creatures or characters that can change size or shape at will, though their giant or tiny forms may fall victim to this trope on their own (and see Shapeshifter Baggage).

Compare Units Not to Scale, in which overworld sprites or models in video games are left unscaled for the player's convenience. See also Bigger on the Inside, Clown Car, Clown-Car Base, and Bag of Holding, in which the scale-bending properties belong to the location or container, not the character. See also Depending on the Artist, Off-Model, and Animals Not to Scale. If their varying size is an in-universe superpower, they are a Sizeshifter.

A subtrope of Not Drawn to Scale. Also compare Scully Box and Cheated Angle.