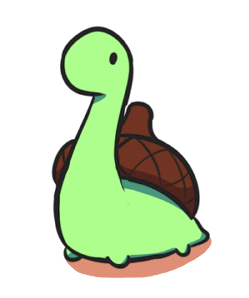 Sheldon, the Tiny Dinosaur who Thinks he's a Turtle

, is a comic strip about, well, a tiny dinosaur who thinks he's a turtle. First started in 2014 as series of tumblr posts by panaran

, the comic depicts the daily life and simple adventures of Sheldon and his friends (a baby seahorse named William and a tuft of cotton ball with eyes named Puff), and how these Liliputian creatures navigate the world with their diminutive sizes.

Not to be confused with another webcomic starring a protagonist named Sheldon.