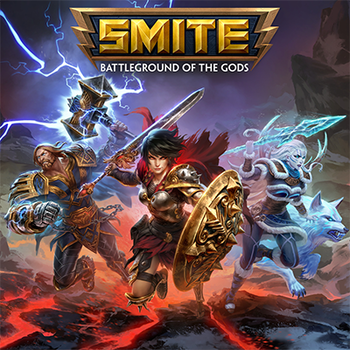 Smite: Battleground of the Gods

is a MOBA game from Hi-Rez Studios, makers of Tribes Ascend. Unlike most other MOBA games, Smite is played in third person view using WASD movement, instead of the classic isometric perspective popularized by DOTA and its other derivatives. Instead of heroes or champions, the players in Smite control gods from various mythological pantheons, like Greek, Egyptian, Chinese, etc. Like in almost all MOBA games, it takes place on a map of three lanes, defended by towers that have regular waves of NPC Mooks running down them. The objective of the player is to help these "Mooks" destroy the enemy towers and eventually their base (or Titan in this case) while preventing the enemy team from doing the same. Players gain gold and experience for killing NPCs and enemy gods which they respectively use to buy new items and level up to improve their abilities. Smite, however, includes several other game modes that deviate from the standard formula.

The game is Free-to-Play and was released for Windows on March 25, 2014. It has adopted a similar model to League of Legends, with a weekly rotation of gods that can be played by anyone and the option to permanently unlock them with in-game currency earned by either playing or paying. It also has the "Ultimate God Pack", a one-time purchase of all current and upcoming gods.

An official comic has now been made providing the game with a story. It can be found here.