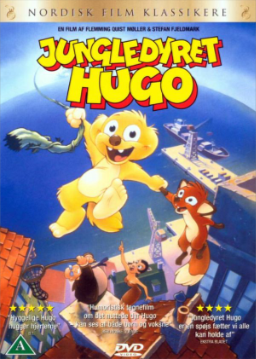 Denmark loves it! Everyone else... is pretty much unaware the thing exists.
Advertisement:

Jungledyret Hugo (also known as Go Hugo Go in the English version) is a Danish animated film series by A.FilmA/S about a little mammal named Hugo, who is one of a kind.

The first film introduces us to Hugo, an apparently one-of-a-kind anthropomorphic animal who lives in a jungle. Youthful and carefree, Hugo is prone to playing practical jokes on his friends, Zig and Zag the monkeys. His idyllic lifestyle is interrupted when he is captured by the CEO of a famed movie company, Conrad Cupmann, to be a co-star in a Hollywood-style film. In order to return from Copenhagen to his jungle home, he must escape with the help of a newly found friend, Rita the fox.

The sequel, Jungledyret 2 - den store filmhelt (Hugo the Movie Star in the English version), picks up where the first movie left off. Hugo and Rita each tell their friends about how much they miss one another. Meanwhile, the CEO of the movie studio still wants to catch him. His plan is to have Hugo co-star in a film, and then earn lots of money through merchandising.

In 2003, the franchise was made into an animated TV series. It led up to the events of the third film. Thirteen episodes of 26 minutes were produced, and originally aired 2003-2004.

The third film, Jungledyret 3 - Fræk Flabet og fri, continues where the animated series left off, which in turn is a sequel to the second movie. It is a CGI film. The plot again involves Hugo being captured, this time by several competing groups of humans who are all after Hugo for their own reasons.

Near the end of the movie, Izabella the main antagonist, has a mental meltdown when her husband breaks up with her, due to her obsession with Hugo.

Near the end of the movie, Izabella the main antagonist, has a mental meltdown when her husband breaks up with her, due to her obsession with Hugo.