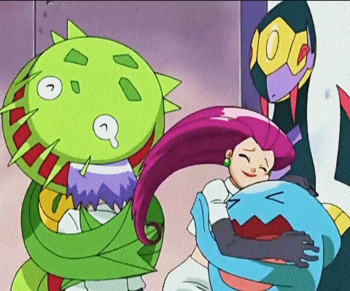 Two Pokémon showing their own forms of affection to their trainers...
"Biting's excellent! It's like kissing, only there's a winner!"
— The TARDIS (in a human body), Doctor Who, "The Doctor's Wife"
Advertisement:

Very much Truth in Television with the existence of hickies, and there are plenty of animals who will bite to show that they love you. Fair warning though: Some animals don't know how to bite softly. It's also known as the condition Odaxelagnia in Real Life.