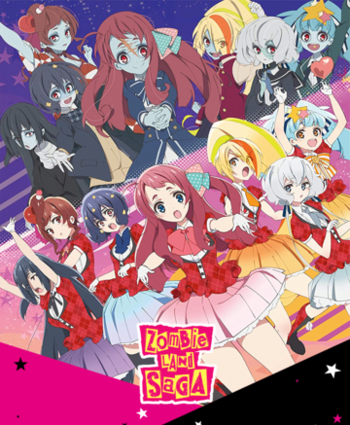 Idolhood is realized in the face of death.note From left to right (bottom row): Tae Yamada, Yugiri, Ai Mizuno, Sakura Minamoto, Saki Nikaido, Junko Konno, and Lily Hoshikawa
"Even though we're dead, we want to live our dreams!
No, we WILL live our dreams!
Is that despair? Or is it hope?
Our reanimated bodies are pulsing with courage, even though we don't have a pulse!
Because this is our saga!"
— Sakura Minamoto, opening narration for Season 1note Don't worry, the premise is sillier than it sounds.
Advertisement:

Sakura Minamoto is your typical Japanese schoolgirl who dreams of one day becoming an Idol Singer. She wakes up one sunny morning, listens to her favorite song, gets her idol application paperwork together, steps out the front door, and promptly meets the business end of a speeding truck.

The next thing she knows, Sakura awakens in an abandoned mansion in Saga Prefecture with no memory of who she is or how she got there. She quickly discovers six zombie girls from different eras of Japan's history lurking in the mansion, all gathered together by a shifty, shades-wearing stranger named Kotaro Tatsumi, who informs Sakura that she has been dead for ten years, and is now a zombie herself. But for what purpose has Kotaro brought these rotting, flesh-craving beauties back from the grave?

Why, to form a regional idol group that will save Saga from fading into obscurity, of course! What Could Possibly Go Wrong?

Zombie Land Saga (ゾンビランドサガ) is an original anime collaboration between Cygames and Avex Pictures, and animated by MAPPA. Marketed as a seemingly run-of-the-mill zombie horror series, its plot was kept heavily under wraps until its premiere on October 4, 2018, which revealed it to be an off-the-walls Horror Comedy with a biting yet loving satire of the Japanese idol industry. The series is currently licensed by Crunchyroll and Funimation.

Its second season, titled Zombie Land Saga Revenge (or Zombie Land Saga R, for short), was announced back in 2019, and premiered on April 8, 2021. Set just a few months after the first season, it follows the idols' efforts at getting back on their feet from one Epic Fail of a bomb right on the heels of a smash performance that left them with a multi-million yen debt.

A movie following on from Revenge was announced in October 2021.

A web manga adaptation that focuses on Kotaro's side of the story up until Season Two began its run in October 2018 and ended in May 2021. A manga anthology was released in April 2021. A spinoff manga titled Zombie Land Saga Gaiden: The First Zombie began in May 2021, focusing on the backstory of Tae Yamada/Number Zero.

on October 19, 2019, with its own original cast as Franchouchou rather than the anime voice actors. It was set for a short run in March 2020,

but was initially cancelled, due to the COVID-19 pandemic. It was subsequently brought back from the dead, with the play running in September of 2020.

Has no relation to the similarly named 2009 movie Zombieland, although the makers are aware of the similar name and eventually cross-promoted

Edited clips from Zombieland Saga, Ep 01 (Duh =P). Lead protagonist Sakura Minamoto is setting off for a idol tryout to follow her dreams... and promptly gets hit by a truck before the title even drops. But don't worry, she's okay... mostly.

Edited clips from Zombieland Saga, Ep 01 (Duh =P). Lead protagonist Sakura Minamoto is setting off for a idol tryout to follow her dreams... and promptly gets hit by a truck before the title even drops. But don't worry, she's okay... mostly.